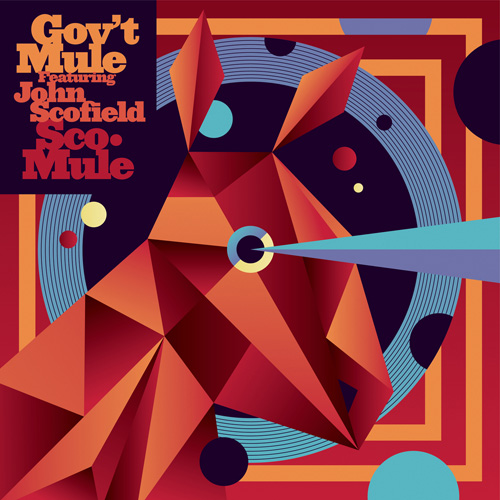 The second instalment of the Gov’t Mule 20th anniversary celebration has been a long time coming, ‘Sco-Mule’ has been in the pipeline for over a decade and will now see the light of day on 26th January 2015 on 2CD/Double vinyl. In September 1999 Gov’t Mule was a little over 5 years old and began embracing and exploring personal influences which weren’t quite present in the music at that stage. They had written and recorded jazz-influenced instrumentals such as ‘Trane’, ‘Birth of the Mule’ and ‘Thelonius Beck’, but had never, at that point, done any “live” performances that were predominantly made up of instrumental songs.

At this point, enter jazz-rock guitarist John Scofield, who has previously played and collaborated with legends such as Charlie Mingus, Miles Davis, Herbie Hancock and Chet Baker amongst others. Gov’t Mule had begun including more guests into the live shows and were joined by Scofield for two shows; one in Atlanta and the other in Athens, Georgia – this was after only one full rehearsal.

Talking about the shows Warren Haynes reflects; “We came out and played what would be the equivalent, time-wise, of a first set filled with hard-rocking Mule staples. Then we were joined by John Scofield and special guest keyboardist Dr. Dan Matrazzo for our first-ever all instrumental “sets”. In some ways this was the beginning of a new outlook for Gov’t Mule as we were constantly looking for new directions to explore. Less than a year later Allen Woody passed away and after a period we didn’t know if we would even continue.”

No two Gov’t Mule shows are the same, and like recent release ‘Dark Side of the Mule’, ‘Sco-Mule’ also reflects the breath and eclecticism of their talent with their ability to transform themselves continuously in a live setting. The band can draw on more than 300 songs in their repertoire (and often a host of special guests) to create a unique experience each and every time. The deep chemistry and steely confidence shared by the current line-up of guitarist-singer Warren Haynes, drummer Matt Abts, bassist Jorgen Carlsson and multi-instrumentalist Danny Louis also allows them to tackle any form of music and stamp it with their own identity. The series of new live archival releases really drives this point home with the third (‘Dub Side of the Mule’) and final instalment (‘Stoned Side of the Mule’) still to come.

Reflecting on the collaboration Scofield recalls the moment the seeds were sown. “It was about 25 years ago that I first met Warren. He turned up at the New York club Sweet Basil and said we should play together sometime. He looked like Dennis Hopper in “Easy Rider,” and I wondered, “Who is this guy?”

Continuing he adds “Warren and I stayed in touch, and a few years later he invited me to play some shows with Gov’t Mule. I flew down to Atlanta to rehearse with Warren, Allen Woody, Matt Abts, and another special guest, Dr. Dan Matrazzo on keyboards. “These guys are the real deal,” I remember thinking. Although I’m known as a jazz player, I started out playing blues, and I think that Warren sensed that. I loved playing with them and I still do. The shows we did then were excellent musically and a lot of fun for me -I think they stand the test of time all these years later.”

Warren Haynes’ unparalleled ability to bring together different musicians into a cohesive whole or to pull off epic musical happenings is one of the many reasons why Haynes stands apart from the many great front men and guitarists who have graced the musical landscape. Combined with his guitar and vocal mastery, these skills have made him an in-demand presence and indispensable musical ally for many.